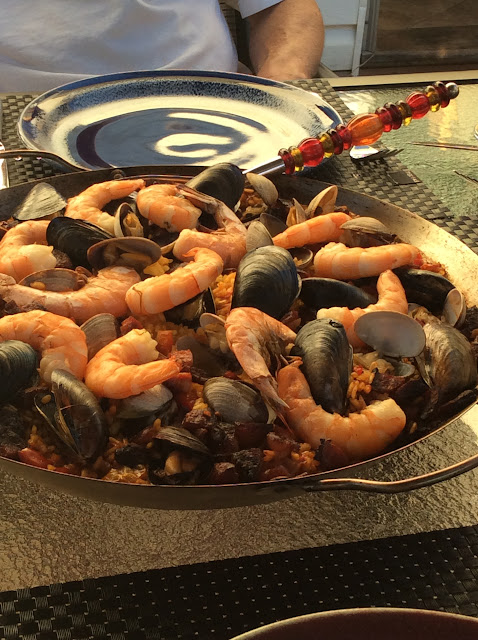 This could be my favourite dish. You know that question: "What would you like for your last meal?" Well, this might be the one. There's such a collection of seafood on the top you almost can't believe it. It takes about 2 hours to make and will cost a small fortune but it WILL be the best paella you've ever had- EVER!

1.  Cut tomatoes in half and coarsely grate tomatoes into a bowl and discard the skins. Grating gives a nice texture to the meat of the tomatoes.

Or, you can blanch the tomatoes to remove the skins and do a quick blender chop up. First score the skins only with a sharp knife making 4 cuts making an "X". This makes removing the skins easier. Place tomatoes in boiling water for 10 seconds and then remove placing in an ice water filled bowl- not long. Remove after they have cooled and remove the skins. Blend a little as we don't want total mush.

2. Put chopped onion and chopped bell peppers in a bowl.

3. In a small bowl measure paprika, salt and garlic.

4. Put rice in another bowl. 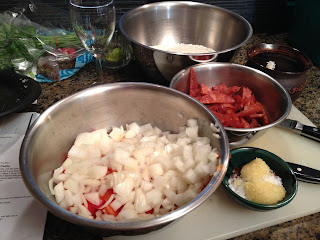 8. Toast saffron in a large sauce pan on the stove at medium heat. Stirring about 2 minutes, until fragrant. Add the 6 cups chicken broth and the white wine, cover and bring to a boil over high heat.

(Bring the remaining 3 cups of chicken broth to a boil in a small covered pan.)

10. Heat the paella pan on the grill. Add 3 tbsp of olive oil, then the chorizo. Brown the chorizo, stirring occasionally for about 5 minutes. Using the slotted spoon remove the sausage an place it back in it's bowl. 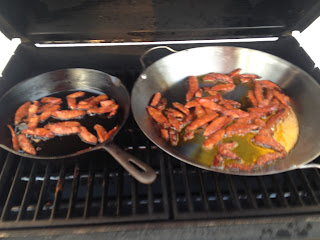 11. Saute the onion and bell peppers in the pan until the onion softens. About 5 -6 minutes. 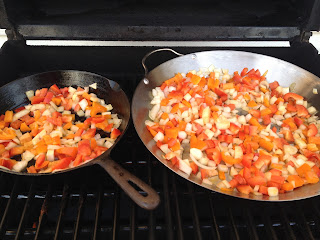 12. Stir in the tomatoes and cook. Stir often until the liquid evaporates and the tomato paste turns a darker shade. About 12-15 minutes. 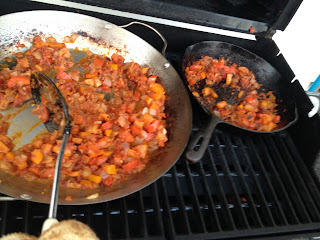 14. Add rice and stir until evenly coated. Smooth out level. 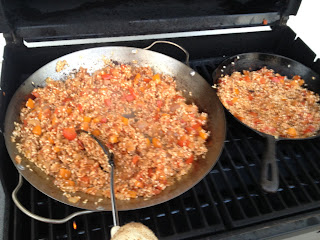 15. Being careful, pour hot saffron liquid over rice and arrange chorizo on top. Cook at a steady simmer for 12 minutes. 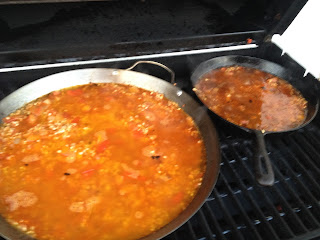 16. Pour remainder of saffron liquid over paella so rice is just covered.

(for EXTRA piggy size- Pour enough hot plain chicken broth over paella so rice is just covered in liquid. You may not use it all.)

17. Place muscles around near the edge of the pan pushing them into the fluid. Scatter the remaining muscles, clams and shrimp over the paella. 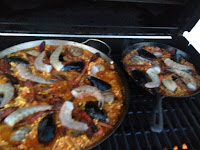 18. Close the lid on the grill and cook until the clams and muscle open (throw away any that don't open) and the rice is al dente. About 6 - 10 minutes.


19. Remove from grill carefully and place on a trivet. Cover with paper towels for about 5 minutes. This is important to let it stand. 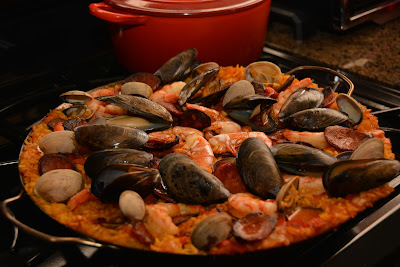 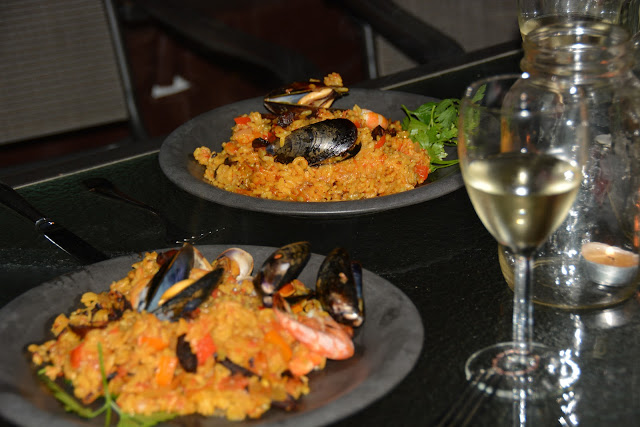 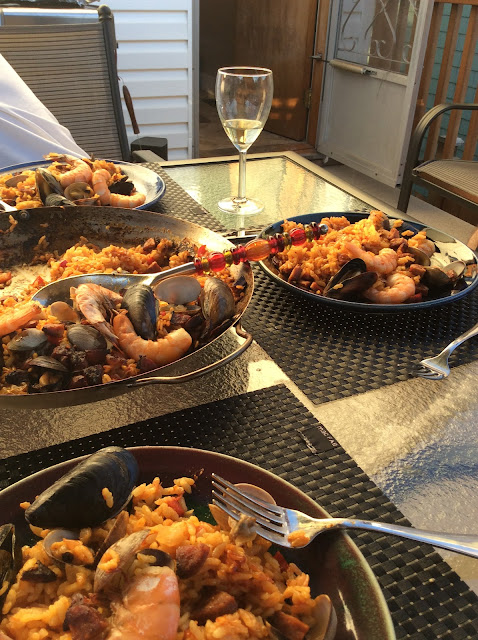 I love making this paella when we have company over. It is especially wonderful when we have out-of-towners come in that don't have the same access to fresh seafood that we have access to. We even made the large recipe and gave the small pan to neighbours when they had a baby- every new parent welcomes food they don't have to prepare or think about!